Recently I've had a few heated discussions regarding WikiLeaks with people who question the motives and consequences of leaked secret documents. Some believe a leak this massive is only possible if it is either a disinfo operation run by those seeking to further censorship the internet or in the best case scenario, it is being exploited to leak false or filtered documents that will push the globalists agenda. From what I gather, WikiLeaks sceptics think this way because, they say, WikiLeaks has had mass media attention. Because the content is slanted or unimportant. Because it promotes war with Iran and because it blames the US. Oh, and the fact that Assange hasn't caught up with the inconsistencies in the main stream story of what happened on 9/11. Some also claim a "fishy" gut feeling that something isn't right but they can't put the finger on it! Hmm...

Fair enough, Assange has discredited the 9/11 movement but I know plenty of intelligent people who still to this day don't dare looking at the evidence of what happened. Like Noam Chomsky and Michael Moore for example. Could this be a symptom of main stream indoctrination and arrogance of knowledge? Or is it necessarily a conscious and deceitful action of a "disinfo agent"? 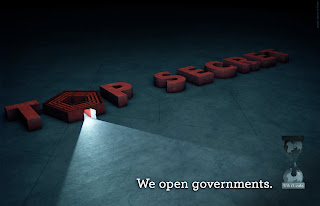 So the leaked documents marginalize the US and don't put Iran in a good light. They also reveal embarrassing facts about other countries like China, UK, France, Italy, Russia, Saudi Arabia and many more. Just because the main stream outlets focus on Iran and try to spin the information to fit their warmongering agendas, does it mean that the info itself is biased? Why would WikiLeaks bother releasing information that affects a huge amount of diplomats/spies all over the world across a broad range of countries? How else could they have shown neutrality? Also, why would a disinfo campaign disclose that US diplomats spied on UN leadership and were asked to collect passwords, credit card numbers and biometric data including fingerprints, iris scans and DNA?!!

It's true WikiLeaks has had the mass media attention but it would be hard to ignore a movement that has been causing an ever growing buzz on the internet over the past 4 years and that has had at least 3 major leaks just over the past year, the Iraq and Afghanistan war logs as well as the very graphic Collateral Murder video. The later shows a US Apache helicopter killing over a dozen of civilians indiscriminately. I'm still to see how this supports the disinfo operation theory.

It is also true that there are moves to further tightening the censorship of the internet. But is this a knee jerk reaction to turn an unpredicted crisis into a useful tool or is it all part of a carefully planned operation? Well, it may be either really. But if WikiLeaks is indeed part of a bigger plan to further erase human liberties, why did Amazon refuse to host the site? Why did Paypal suddenly realise that the WikiLeaks donations account was not in accord with their terms and conditions? Why are there politicians calling for the website to be taken offline or even Assange's assassination?! Why was the website's DNS routing service dropped? Why did MasterCard make it impossible for people to donate? Why was the Swiss bank account frozen? Why the smear campaign of Assange and now his arrest? Why confirming the corruption up high that most already suspected and spreading further distrust of the political system?

I have to say, if WikiLeaks is indeed a disinfo operation, they sure are putting up a heck of a show! But what do I know?

The victory of cynicism

Assange has a whole team of committed volunteers behind him but the media focus is mainly on the man. He's the "lightening rod" of WikiLeaks as he puts it. Now, if there's something that those at the top want more than anything, is to program in the masses the deeply cynical belief that an individual cannot ever possibly make a difference. That individual effort will always be in vain. That any apparent positive change always has a negative agenda behind. So that when someone really does stand out and really does rock the boat people will see it as another covert operation. This is one of the ways how the small elite keeps the power from the huge majority. By making you believe that you are insignificant that you have no power. 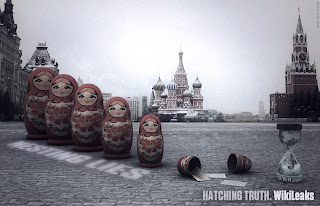 But this isn't the full story. Of course Assange and WikiLeaks have an agenda. Even if they're trying to achieve transparency it is still an agenda. But how they plan to achieve this is not through the leaking of crucial, incriminating juicy content itself as the disappointed public expects. Apparently, which information is leaked is unimportant. Yes, you read it right, the information is secondary.

In an essay written by Assange in 2006, entitled "State and Terrorist Conspiracies", the hacker equates a secret cabal to a computer network and explains how it cannot survive in an environment where secrets can be leaked. He argues that not only will the network have to adjust to the constant whistle-blowing, therefore distracting it from its main agenda, but will also become highly paranoid and therefore ineffective. And so far that is precisely what we're seeing as those affected by the leaks run around like headless chickens desperately trying to shut down, to censor and to stop that which is unstoppable. It is the perfect check mate.

Thanks for pointing out the typo.

I'm wrestling with this argument myself. You make some great points. Theres a few extra factors to consider tho. Theres some blog posts about the fact that there are no major diplomatic cables from the time of the israeli war against hezbollah, which is suspicious, and talk of assange making a deal with someone in the israeli govt. Anti semitic propaganda? Perhaps, but I'm not certain.

Secondly, people that used to work with wikileaks have left, claim assange is a despotic, narcissistic leader. The guy who runs cryptome being one of them, the guy who used to be the other public spokesmen, daniel schmitt, being another. Their testimonies are interesting and especially valid.
A third is the concept that the release of information that is embarrassing to the US and it's allies would not be deliberately leaked by elements within the american government. but this depends on the aim; if it is to create chaos, in order to implement more effective, centralized control (as some people consider the recent economic crisis), then the only thing having embarrassing leaks would do would add credence to the leaks that they WANT to be made public.

Fourthly, I believe assange - he's a very clever guy. He believes he's a freedom fighter, a revolutionary. But that doesn't mean he is not being manipulated without even realizing it.

This is my first time on this blog, so I don't know if the last point is going to alienate, (forgive the pun). my point is, I am undecided about wikileaks, just as I am about many issues, because I don't know all the facts. But I feel there is more to wikileaks than meets the eye. Lets hope the fulness of time reveals.

Thanks for the input, snapstring.

So who knows what kind of information will be revealed in the following 99.5% of the cables to be disclosed.

I am aware of the disagreements and criticisms of Assange by some of WikiLeaks people. Assange comes across as very driven and strong minded so it seems plausible that he might have rubbed some people the wrong way. (I don't apologise for the pun) But show me a strong leader who doesn't.

I read today that those ex-WikiLeaks members are about to launch their own leaking organization, OpenLeaks. That'll be interesting to watch developing.

I'm afraid you lost me in your third point!

I believe there's always the possibility that WikiLeaks might be used to leak data by the powers that be to push their agendas. But the point I tried to put across in this post is that if this is the case, they appear to have done a very sloppy job. I believe if this was the case they could have done with a lot less self-damage.

The UFO subject is welcome here (as any other subject). In fact the sister blog is dedicated purely to the UFO subject.

Thank you, for your open minded contribution to the discussion.

My third point is that it would be wise, if you were, say, the CIA, to release damaging info about your own govt, in order to establish a media outlet such as wikileaks which people would assume had nothing to do with you. you could then release further info to this outlet, to manipulate policy, denigrate people you have no use for, pressure people you do have a use for. At the same time you'd need to continue leaking more embarrassing info about your own team, (but maybe not your highly valued assets) to make your media outlet continue to seem credible. If this helps you achieve highly valued policy aims, such as implementing global internet control, all the better. does that make sense?

Another way of puting it - order out of chaos: create bewilderment to assert greater control.

I would appreciate your comments about wikileaks potential for ufo disclosure as well if you have time. :)

snapstring, anything is possible. However if we are going to distrust every news source then I don't see the point of having an interest in current affairs all together. It seems to me a frustrating and painful exercise.

Personally I don't see why intelligence agencies would have the necessity to create yet another news organization while the current main stream, seems to be doing perfectly fine job of pushing their agenda to the yet largely naive and mass media indoctrinated masses.

Said that, it's perfectly plausible that if they are unsuccessful at disabling wikileaks and other such organizations, that they will try to undermine their trust by feeding it disinfo.

As for it being an excuse to further centralization of power, I think they have made their job much harder and I don't see how they will achieve that legally. If anything the moves by those wanting to censor has awaken millions to the true colours of those in power who used to preach freedom of speech (Obama is one that comes to mind), creating further awareness and resistance to the censorship efforts.

As for your last point. It's possible that leaks organizations will, in time, be used to put out UFO related information. As the moment however it appears that their focus is closer to home, mainly on gov and corporate deceit and corruption. Said that, there are already a lot of UFO leaks out there thanks to The Disclosure Project so maybe these would not be considered leaks as they are "material that is publicly available elsewhere", as specified in the WikiLeaks editorial criteria.